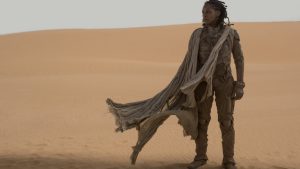 It was about 50 years ago that my older cousin convinced me that I just had to read Frank Herbert’s Dune. There was much to fascinate tweenager me: desert survival, spice producing sandworms, Spacing Guild navigators bending time and space with just their minds. But what most impressed me was a secondary character, Liet Kynes, who held the position of Imperial Planetologist. They had the mission of understanding how the ecosystem worked on Arrakis and how humans could manage it for better or worse. Taking on the management of planetary ecologies seems all the more vital in the 2020s than 1970s. Fifty years ago, our understanding of planets came just from our homeworld. Now, we know of thousands of planets around other stars. And we are learning so much more from exploring the two planets closest to us as we try to discover if they were ever home to life and how they have evolved into places so challenging to life. 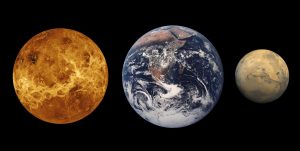 Planet watchers can see a graceful rendezvous between those two neighboring planets this month. Look west on July 1st around 9:15 (a half hour after sunset) to see brilliant Venus ten degrees above the horizon. That’s about the width of your outstretched fist. Mars will be seven degrees above and to the left of Venus. That’s about the width of four fingers. Mars is two hundred times dimmer than Venus and will take more time to spot. Get out your binoculars July 2nd and 3rd to enjoy Venus passing in front of a lovely sprinkling of stars known as the Beehive Cluster. This open cluster is about as wide as three Full Moons and contains a thousand stars with at least six exoplanets discovered so far. Then keep watching as Mars and Venus move closer together. They will be just about parallel with one another on July 11 (when a thin sliver of a Crescent Moon will be off to their right) and on July 12, (when the Crescent Moon will be above and to their left). 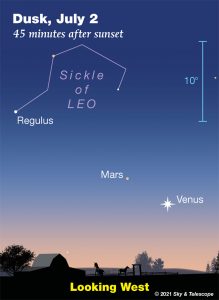 Venus and Mars are at their closest on July 12 and 13 when they are just a half degree apart. That’s the width of the Full Moon. We won’t see them as close until 2034. Watch the rest of July as they move further apart. By July 31st, they are the same distance apart as July 1st, except now they have switched positions with Mars closest to the horizon. Mars’ orbit is taking it behind the Sun, so we won’t see it again until it moves far enough away from the Sun to be visible in the dawn skies of December. Venus remains bright in the evening sky for the rest of the year. And maybe be a planetologist and ponder what ecosystems they may have been home to. 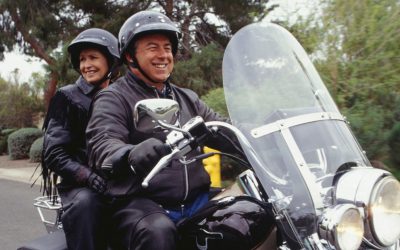