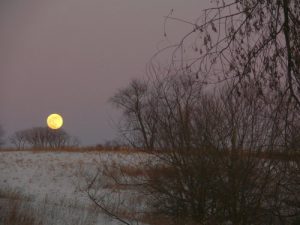 One cool thing I am already loving about 2022 is that our months are aligning nicely with the phases of the moon. For winter and spring, each month begins with a new moon and cycles through all the phases of the moon. The lunar cycle of 29 ½ days is a day shorter than the average month, so by summer the lunar and calendar months will no longer be in sync.

New moon is on January 2. We only see this during a solar eclipse when the dark moon passes in front of the sun, and that won’t happen again until October 2023. Watch after sunset on January 3 for a slender crescent moon low in the southwest and setting about an hour after the sun. You may also be able to see the innermost planet Mercury a few fingers above the moon and brighter Venus about a fist to its right. Binoculars may help as you sweep the horizon, and they will help you to see Earthshine–sunlight reflected from the Earth lighting up the dark side of the moon. Keep watching the next evenings as the crescent moon waxes fuller and is visible for longer and higher in the sky after sunset. On January 4, it will be below and to the left of Saturn, and on January 5 it will be below Jupiter. Less than a week into the new year, and you’ve already visited five other worlds!

By January 9, the moon is half lit and half dark and has reached first quarter. Now the moon rises around noon and sets around midnight. You should be able to spot it in the southern afternoon sky before sunset. The moon waxes on though its gibbous phases until it is full on January 17. It is 100% illuminated by sunlight at 5:50pm, but it will appear almost as full the day before and the day after. This one is called the Wolf or Ice Moon among other names. It rises in the northeast as the sun sets opposite it in the southwest and is visible high across the night sky for almost 16 hours before it sets in the northwest as the sun rises in the southeast.

The moon wanes through its gibbous phases and rises about an hour later each evening and will remain visible in daytime as it lingers in the morning sky. Last quarter is on January 25 with the moon again half lit and half dark but the reverse of first quarter. This moon rises around midnight and sets at noon. If you are watching before dawn, you can catch sight of it in the southeast. Look there before sunrise on January 29 to see dim Mars just a finger’s width above and to the right of a slender crescent moon with brighter Venus about a hand’s width to the left. New moon is on January 31, and the cycle repeats for February, March, April, and May as the lunar and calendar months align for a time. 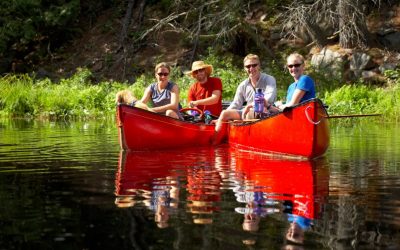